Skip to content
Previous Next
A Gentle Giant September 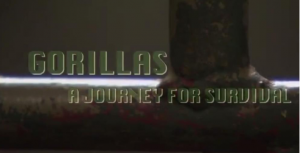 Every Sunday at 5:30 PM EAT on Citizen TV, Kenyans get to see stories and learn about African Wildlife through the My Wild Africa series. In September, Kenyans were introduced to the Western Lowland Gorillas and the gentle giants of Angola.

Thousands of wildlife species, including the gorilla, fall victim to the bushmeat trade every year, which still today flourishes in all parts of equatorial Africa. Adult gorillas are killed for bushmeat. The poachers manage to sell orphaned gorillas and chimpanzees to zoos. Some zoos play a role in the illegal wildlife trade by getting animals from poachers.

Oyin, Abbey, Tinu, and Izan, the four Western Lowland Gorillas, also known as the Taiping Four, were smuggled when they were young to Taiping Zoo in Malaysia, via South Africa. The Malaysian government sent them back to South Africa in 2004. They arrived in the National Zoological Garden of South Africa who offered to accommodate the gorillas and has become their home, but DNA testing has proved that these gorillas originated from Cameroon and its government has requested numerous times for the gorillas to be sent back home.

Cameroon’s rainforest is amongst some of the diverse ecosystems in the Congo Basin. However, this rainforest is rapidly diminishing and many of the wildlife species that inhabit this forest are headed to extinction. Every year about 5 million tonnes of bushmeat trade from the Congo Basin alone, threatening the survival of already endangered wildlife species including elephants and great apes.

The Taiping Four found a new home at the Limbe Wildlife Centre in Cameroon. Returning the gorillas to Cameroon was a significant event in the history of the country. Kenya Airways agreed to fly the animals at a subsidized rate on a scheduled flight from Johannesburg, via Nairobi and onto Douala in Cameroon. Viewers got to learn that the human species is the only race that can protect and conserve this world.

In the ’70s, Angola had the largest elephant population in Africa but by the mid-’90s there was none left. Close to 200,000 animals were killed in the Angolan war where ivory was sold to buy weapons. Dangerous Trails is a powerful film that highlights the dangers and barriers refugee elephants and the people go through to avoid being killed by landmines that were placed during the Angolan War. The film explores how elephants are saving themselves and people by avoiding these landmines.

In the early days returning elephants were killed by the landmines left by the Angolan war but there are no recent reported incidents. A German organization, Menschen Gigen Minen demines Angola using dogs who pick up on any landmines in the ground, perhaps so do elephants as they move back to Angola safely.

Now that Elephants dared to return to Angola, other animals follow; Buffalos, Wildebeest, Kudus, Impalas, Zebras, Elands, and Lions. Botswana acted as a haven for wildlife in Southern Africa as long as war raged in Angola. After the Botswana Government signed the Angolan peace Agreement, they took down fences allowing elephants to start going back home in Angola.

Tune in to My Wild Africa on Citizen TV Kenya every Sunday at 5:30 PM EAT for more insightful and high-quality wildlife films about African wildlife.