Skip to content
Previous Next
A Tribute to Tim

A Tribute to Tim, the most Majestic Elephant 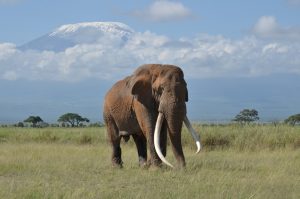 Rest In Peace Tim, the most majestic elephant that I have ever met. Probably the biggest tusker in Africa. Unlike Satao who we didn’t know until he had died. We raised awareness about Tim so that all people especially Kenyans got to know him and had a chance to meet him while alive. I know that many people warned me that sharing photos of Tim would lead to his demise. They did not. Tim brought so much joy to so many people. I know at least one person whose purpose in life was a quest to meet Tim. He had no shortage of humans who worshiped him.

I feel especially fortunate that Tim let me get close to him on many occasions. Often I was I was alone, but then there were those rare moments when I was with my students or my family. If I was in awe of Tim, it was an understatement whenever others saw him. There were the gasps of disbelief. I could stay with him for hours. He would act as if I wasn’t there.

In 2014 during a board meeting in Amboseli, we found out that Tim was injured. Someone had speared him and he was limping. My board was very upset that such a giant had no protection. They immediately committed to saving Tim. It wasn’t until late 2016 that we could put a collar on him. The project involved many players; Save the Elephants, Big Life Foundation, Amboseli Trust for Elephants, Kenya Wildlife Service, and the community. Tim was fitted with a collar and that meant he could be followed, protected and kept out of farms. I wrote about it on my blog here. It worked exceptionally well. Too well. Tim lost weight because he couldn’t raid farms. But within two years he somehow got rid of his collar. Without it, he and his gang could return to his nocturnal terrorizing raids on nearby farms.

During the filming of Wildlife Warriors last year we went to look for Tim. He was standing with his askaris, a group of big males who stood in a defensive array of outward-pointing tusks. There was Tolstoy who is easy to spot as the tips of his tusks have been sawn off and Townsend, who is Tim’s little nephew. They wafted their ears lazily even though they looked awake and terrifying, we could see that they were asleep. Tim slept last – mostly because his body kept swaying slowly from side to side with the incredible appearance as if he was about to fall down.

The next day a National Geographic crew came to shoot with us and after seeing our footage of Tim and his gang, were determined to get the same image. We returned and found Tim with about fifty other elephants. It was a family gathering. After about an hour, the bulls pulled away. We followed them from a distance. They stopped and stood out in the open. We got to within ten meters. They didn’t seem to care, and one by one they lay down, then snored for two hours. Tim surprised everyone. He was a crop raider but he was a gentle, calm, intelligent being. His size was breathtaking, and he seemed to know it.

As a huge male, Tim secured many matings with the females and so we are certain that he’s a baby daddy to many little ones in Amboseli. The gene for ‘super tusker’ has been passed on many times.

I would be lying if I said I wasn’t heartbroken that Tim is no more. But I’m also proud. Proud that he died of natural causes. That our work did create awareness of this giant in Kenya and around the world. I’m sad we never got to host the Elephant Naming ceremony with President Uhuru Kenyatta – an event that we hoped would really create much more awareness about our pride and heritage. I’m sad that we were unable to persuade others that we should be celebrating and naming our elephants as a nation.

RIP Tim, fly with all the other Elephant Angels.