My Wild Africa series continues to air every Sunday at 5:30 EAT on Citizen TV showcasing wildlife documentaries filmed in Africa. In August, viewers had an opportunity to learn about the African cats including the fastest land animal featured in the Cheetah Diaries. This series chronicles the lives of cheetahs, serval cats and caracals at the Cheetah Outreach Centre located just outside Cape Town, South Africa.

Cheetah Diaries highlights the Cheetah Outreach’s education program which provides an opportunity for people of all ages to learn about cheetahs. Meeting the cheetahs has been a powerful educational tool. The education program spreads awareness on cheetahs and other African cats that are under threat as their habitat disappears.

Cheetahs are listed as Vulnerable and today there are only an estimated 7,100 cheetahs left in the wild according to the International Union for Conservation of Nature (IUCN) Red List of Threatened species. The primary reason for the cheetah’s decline is human-wildlife conflict, shrinking range due to habitat loss throughout Africa and illegal trade as they are sold as exotic pets and poached for their fur. Cheetahs today roam in unprotected lands more than they do in protected areas. As a result, they come into conflict with farmers and their livestock.

Every Sunday, Kenyans have met four cheetah cubs, Yankee, Whiskey, X-Ray and Zulu, other adult cheetahs and a Serval Cat known as Baggins at the Cheetah Outreach Centre. These African Cats are trained to act as ambassadors for their species. The Cheetah’s relaxed and gentle nature, their easy-going character and their ability to bond strongly with humans, means they make ideal ambassador cats.

A success story in the Cheetah Outreach Centre is the livestock guarding dog program which has placed dogs in cheetah range areas in South Africa to help mitigate human-wildlife conflict. The livestock guarding dogs, a Turkish breed, the Anatolian shepherd dog, was originally bred to protect livestock from bears and wolves. The dogs are given to farmers when they are puppies and are raised exclusively with the flock or herd protecting the livestock from a variety of predators such as cheetahs, leopards and caracals. By deterring predators, the livestock guarding dogs prevent farmers from poisoning or trapping predators. The dogs deter predators by barking and standing their ground to try to scare the predator away preventing persecution of the cheetah by farmers. Since the dogs warn of the predators, no livestock are lost and the farmers no longer have to shoot, trap or poison them. 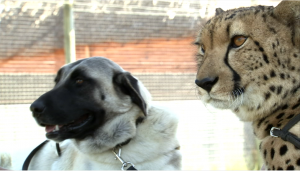 Throughout the series, Kenyans were taken through the training process of the cheetahs which includes running, to help the cheetahs get exercise, monitoring their dietary needs and the regular veterinary visits. Cheetah Outreach has a specially designed running enclosure for the cats. This helps to keep the cheetahs fit and healthy. Cheetahs are capable of reaching speeds of up to 93km/h in short bursts of 35 seconds as their bodies heat up quickly at that speed. In the wild, cheetahs run every 3 or 4 days either while hunting or when being chased off by larger predators. The running enclosure at Cheetah Outreach helps keep the captive cheetahs at the centre stretched out.

Have you ever seen a cheetah in the wild?

The series also shines a light on a King Cheetah cub. The King Cheetah is rarely seen in the wild as they were hunted to near extinction because of their beautiful coats. The darker markings on their coat are caused by a recessive gene which results in a coat pattern of a mixture of stripes and spots. Visitors at the Cheetah Outreach Centre can learn about the King Cheetah. For most Kenyans, they had never seen or heard of a King Cheetah. This was their first time to see one on their screens. 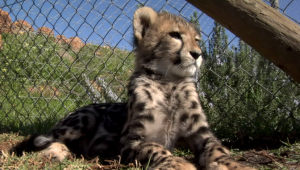 Viewers also got to learn about serval cats through Baggins who joined the Cheetah Outreach facility to act as an ambassador for the serval species and spread awareness about Serval Conservation. Serval cats are a threatened species in Africa. Like the cheetah, much of their habitat is now used for agriculture, roads, and settlements. Serval cats are medium-sized predatory cats that feed mainly on insects, birds and small mammals, mostly rodents. They live in the savannahs where there is plenty of water preferring areas of bush and tall grass near streams. Hiding in long grass and pouncing onto prey is one of the Serval Cats hunting strategies. A serval cat’s long neck allows them to see over the grass. They can jump more than 2 meters above the ground and can even catch birds in midflight. Farmers will often kill servals to protect their livestock, though they generally do not prey on cattle, sheep or goat.

Kenyans also witnessed an eye operation of one of the cheetah cubs, Whiskey, whose mother is thought to have caused damage to her already infected eye by licking at it when she was just a day old. She successfully went through corrective surgery to ensure that she doesn’t lose her eye. We also got to see how the Cape Animal Health Centre is effective in taking medical care of the ambassador animals at the Cheetah Outreach Centre.

In training the wild animals to be ambassadors of their species, the Cheetah Outreach does not force their animals into activities they are not prepared to do. The Centre learns to cope with the good and bad days of all its ambassador animals.

Tune in to My Wild Africa on Citizen TV Kenya every Sunday at 5:30 PM EAT for more captivating and high-quality wildlife films about African wildlife.