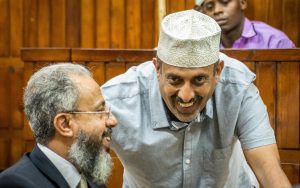 Feisal with one of his lawyers, Taib Ali Taib

A High Court Judge set free a convicted ivory trafficker, Feisal Ali Mohammed, who was serving a 20 year sentence and a penalty fine of 20 million shillings (USD 200,000). Feisal had already served two years of his sentence after being found guilty of trafficking in 2,152 kilograms of elephant ivory before the High Court reversed his conviction and sentence. This criminal story has been one of breath taking audacity of corruption and nail biting intrigue. Had we made this up we would have been laughed at for inventing absurd exaggerations.  But I was there and I can tell you that it’s all true – this is the part that I can now reveal.

I have monitored this case in its four year journey from seizure, arrest, prosecution, conviction and final acquittal. It’s one of the key cases the Eyes in the Courtroom team at WildlifeDirect keeps an eye on to make sure they are handled judiciously. I have had cameras in court rooms to document key events coupled with allegations of corruption, misconduct and intimidation that have contributed to the acquittal of Feisal and his four co – accused.

It all started in June 2014 when police officers from Makupa Police Station got a tip off and raided Fuji Motors yard in Tudor, Mombasa. They seized 314 elephant tusks and arrested four suspects who were consequently charged with possession and dealing in ivory. Of these four, Ghalib Kara, Parverz NoorMohamed and Abdulmajeed Ibrahim were indicted as directors of Fuji Motors Ltd where the ivory was found. This marked the first time a company and its directors were charged with a wildlife crime in Kenya. Abdul Sadiq Omar was indicted for his role as Feisal’s right hand man.

For six months Feisal Ali evaded arrest. It is said that he sought safety in the home of known drug dealers to whom he is related. The police would not touch him. On August 12th WildlifeDirects CEO Paula Kahumbu staged a famous sit-in at the Inspector General David. Kimaiyo’s office in an attempt to offer a reward for information leading to Feisals’ arrest. After 8 hours of waiting he finally saw her and accused her of poaching! This hit the headlines and within weeks Feisal was listed on INTERPOL’s Red Notice as a most wanted ivory trafficker. Feisal was finally arrested in Tanzania and extradited to Kenya to face charges through INTERPOL’s INFRA TERA swoop.

Kenyan prisons are notoriously horrible. Dirty, dank, humid and violent. It’s no surprise that for months Feisal tried to avoid going to jail. Feisal applied for bail on his first appearance in court seeking freedom during trial and was denied. He again applied for bail a week later this time alleging he was desperately sick and presented a doctor’s report that showed he needed medical attention for anal fistula. The magistrate approved the bail despite Feisal being a flight risk. This was quickly reversed at the High Court after the ODPP bravely showed that the report was authored and validated by a fake doctor.

His clamour for freedom took another twist. This time he alleged that the evidence and crime scene, relied upon by the prosecution, had been tampered with. This allegation would prove catastrophic to the case if determined as true. The trial court inquired into this and summoned OCS Makupa Police, Chief Inspector Mbua to explain this evidence tampering. The OCS could not explain why he released nine cars forming part of evidence and sanctioning the destruction of the crime scene. Chief Inspector Mbua was quickly transferred to Yatta. This tampering of evidence undermined the weight of the evidence in this case. A ruling to the tampering of evidence was never delivered in court.

At one time Feisal threatened our journalists in court, our court monitors and I received death threats on multiple occasions. Feisal really wanted us to abandon following up the case. Then in quick succession two magistrates handling this case were transferred leaving the case before Hon. Mochache, who had to restart the entire case afresh because she was unable to read the court proceedings hand written by Hon. DG Karani, the preceding trial magistrate.

The prosecution, represented by Alexander Muteti, presented 23 witnesses who gave compelling testimony on the guilt of Feisal. Evidence showed he organised the transportation and offloading of ivory into the Fuji Motors yard. At the close of the prosecution case, the court found that all the accused had a case to answer and all were put on their defence. All gave unsworn testimony that they were innocent. To the courts amusement, Feisal claimed that he had never ivory in his life!

In her ruling the trial magistrate, Hon. Mochache, acquitted all of the accused of the offence of dealing in elephant ivory. This ruling exposed a dangerous loophole in the Wildlife Act that renders offences of dealing in ivory unconstitutional, a serious problem that has been exploited by dealers in illegal trophies to evade justice. However, correctly applying the law, she did convict and sentence Feisal for the offence of possession of elephant ivory. It was a testament to the progress wildlife law enforcement had made since the passing of a tougher Wildlife Act at the end of 2013.

In her judgment, Hon. Mochache, alluded to the need to send a message to those that engage in wildlife trafficking by sentencing Feisal to Shimo La Tewa Prison for twenty years and to also pay a fine of twenty million shillings. As soon as Feisal was convicted he started appealing his conviction and sentence.

This time he changed lawyers and tactics. His new lawyer, Taib Ali Taib would overzealously defend him alleging that Hon. Mochache destroyed court proceedings used to convict Feisal. This outlandish allegation would quickly get shot down on appeal. However, Hon. Chepkwony agreed with Feisal’s lawyer that the tampered evidence had created gaps in the prosecution case.

When reversing this conviction. Hon. Dora Chepkwony stated that there was no sufficient evidence to prove Feisal committed the offence and was also sentenced too harshly. She consequently quashed the conviction and sentence and denied the prosecution’s appeal against all other acquitted offenders in this case.

Kenyans are understandably up in arms about this decision to set Feisal free ivory. His conviction for trafficking 314 elephant tusks account means he is directly responsible for the death of over 150 elephants, not to mention the wasted public funds of the investigations, arrest prosecution and four year court process – it feels like much has been wasted with no tangible outcome.  This decision is huge blow to efforts to bring wildlife traffickers to justice. It hits the reset button on this landmark conviction that marked the first time Kenya had convicted a wildlife trafficking kingpin.

This decision comes on the heels of the death of 10 black rhinos due to mismanagement and further damages Kenyan credibility as a leader in endangered species conservation. This case sets a dangerous precedent that high profile traffickers can scam the system and evade justice. This case reveals critical challenges in the criminal justice system that undermine the fragile progress in strengthening Kenya’s response to wildlife crime. It reveals much more work needs to be done.

The ODPP have indicated they will appeal to the Court of Appeal to challenge the decision. I remain cautiously optimistic but I won’t hold my breath. Another wildlife trafficker walks free and its business as usual.