Skip to content
Previous Next
Kids and Goats for Elephants

Kids and Goats for Elephants

(This article first appeared on Focus on Property Magazine)

By Trish Sewe and Victoria Wangui 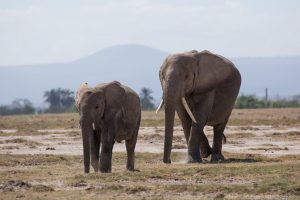 WildlifeDirect uses citizen science approach to engage children in conservation and one such project is the ‘Kids and Goats for Elephants’. This innovative project is pioneered by Dr. Paula Kahumbu, WildlifeDirect Chief Executive Officer and Prof. Thure Cerling a distinguished professor from the University of Utah.

To help stop poaching at the source, it is important for the law enforcement agency to know where seized ivory came from. This is where the Kids and Goats for Elephants project comes in.

The purpose of the Kids and Goats for Elephants project is to create an isotopic map that can pinpoint the area where an elephant’s tusks originated from using isotope analysis.

So how does isotope analysis work? When an animal consumes food it is absorbed into the animal’s bones, teeth, hair, horns or tusks, leaving scientists with crucial locational clues. For example, if a lion bone is discovered, scientists are able to examine the carbon, nitrogen and oxygen isotopes to determine what the lion ate and where – maybe a gazelle in Tsavo – by using the method of isotope analysis. Isotope analysis is used to understand the flow of energy through a food web, recreate past environmental and climate conditions, learn about past diets or in this case, use isotopes to learn where an elephant originated from.

However, there is no database of isotopes! So, even having gathered the isotopes, there’s nothing to match it to. This is where the goats come in.

Goat hair is an excellent way to isolate isotopes. Every time a goat in Amboseli eats a twig, that isotope gets absorbed into its hair signaling to scientists exactly where the goat was feeding in Amboseli.

The children in our programs collect samples of goat hair, label exactly where it was collected and then send it to us. We then send the samples to the University of Utah who create a database of isotopes. Once thousands of samples are received and entered into the database, an isotopic map will be formed. This map will easily allow scientists to match an isotope of a poached tusk to a location on the map.

The Kids and Goats for Elephants project started as a pilot program with 450 students from Mpesa Foundation Academy and now being rolled out in 33 schools under the Wildlife Warriors Kids program. By forming lesson plans and engaging students in a citizen science project, pupils across Kenya have the opportunity to learn more about the relationship between wildlife and domestic animals while developing an appreciation for science and research.

When law enforcement seizes two massive tusks all the way in Uganda they will be able to perform isotope analysis on it and get the results that depict the number of stable isotopes – the carbon, nitrogen, and oxygen isotopes. One will be able to go onto the isotope database and search for the data on goat hair that exactly matches the data found in the tusks. They will also be able to determine that a goat in the Maasai Mara had the exact same layout of isotopes that the tusks did thus determine that the elephant that was killed roamed the Maasai Mara.

This project allows children to participate in forensic science and identify the source of seized ivory while learning chemistry, geography, geology, ecology, conservation, agriculture, and climate change. As we come to the end of the year, we invite you to consider supporting our Wildlife Warriors program and help us get more children involved with the conservation of wildlife.