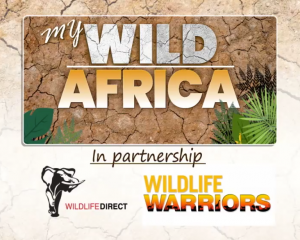 In May, WildlifeDirect announced a partnership with Citizen TV Kenya and launched a series of captivating stories from across Africa. My Wild Africa brings to Kenyans high-quality wildlife documentary series every week on Sunday at 5:30 pm EAT.

My Wild Africa comes in the heels of NTV Wild that was launched in 2016 by WildlifeDirect in partnership with Kenya Wildlife Service and NTV Kenya.  NTV Wild was a groundbreaking series of wildlife programmes on Kenyan television that transformed public attitudes toward wildlife conservation and reached 5 million Kenyans weekly between 2016 and 2017.

These wildlife documentaries showcase the beauty and wildlife in Africa and give Kenyans the opportunity to learn about the different wildlife species some of which have not been seen in Kenya before. Africa remains one of the best places to film wildlife documentaries and My Wild Africa gives Kenyans the opportunity to watch films that have been produced in Africa but rarely get to be aired on local and or free to air channels. Wildlife documentaries have the power to change attitudes, minds, and even laws. By showcasing the beauty of wildlife and nature, we intend to inspire the people to appreciate the beauty of biodiversity, recognize the threats, and the challenges that are facing the environment and act to conserve it. By creating awareness through this program, WildlifeDirect is ensuring that citizens are informed and can take a personal initiative to conserve their environment, lobby stakeholders, and the government to protect these natural resources.

During Easter Sunday in 2020, The Elephant Queen, an award-winning film by Victoria Stone and Mark Deeble, debuted on Citizen TV Kenya causing massive positive feedback across the country. The film had a Twitter reach of over 2 million and more than 5,000,000 impressions.

On Earth Day 2020, The Last Animals, directed by Kate Brooks, was screened on Switch TV Kenya and a few days later it also aired on Citizen TV Kenya. The gut-wrenching film which delves into the wildlife trafficking crisis that is pushing our majestic African elephants and rhinos towards extinction sparked interest in wildlife crime.

On Sunday, May 24th, 2020, the first film in the series, My Wild Africa, The Queen of Trees, was screened on Citizen TV Kenya receiving positive feedback all across the country. The award-winning film by Victoria Stone and Mark Deeble was filmed entirely in Kenya. The Queen of Trees tells the story of the secret life of the Sycamore Fig tree that people pass by every day in Kenya. It is a very common tree and can be found along every riverbank and stream in Kenya. The film is a remarkable story of the tree and the relationship it has with the animals who depend on it.

The series, My Wild Africa, is also targeting children and WildlifeDirect has launched its first newsletter targeting children.  Wildlife Warriors Kids Newsletter is a weekly online newsletter that encourages children in Kenya to watch the series and share their thoughts about the films screened. It also encourages young people to carry out activities that will protect the environment thus nurturing a generation of Wildlife Warriors.