Skip to content
Previous Next
Pangolin: The Most Trafficked Animal in the World

Pangolin: The Most Trafficked Animal in the World

By: Trish Sewe and Judy Wangari

Nairobi-July 5, 2017: Every year for the last six years, World Pangolin Day has been celebrated on the third Saturday of February. A day set aside to create awareness of the most trafficked animal in the world. A world, where illegal wildlife trade ranks fourth after drugs, arms and human trafficking.Pangolins are burrowing nocturnal mammals that are covered in tough, overlapping scales made from keratin, which grow throughout their lives just like human hair. 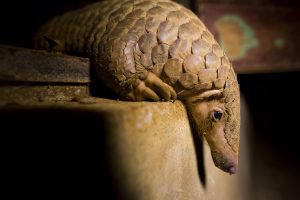 WildlifeDirect has been watching brief on two cases where two people, both Chinese, were charged with possession of pangolin scales. On the first case, Huili Hong was arrested on 22nd June 2016 at JKIA with a bag of pangolin scales, 11 pendants and 3 beaded bangles of worked ivory. He pleaded guilty and was sentenced to pay Ksh. 1,000,000 with 5 years imprisonment in case of default, which he has since paid and left the country.

The second case, which is ongoing, is that of Liangzhi Zheng who was arrested on 10th June 2017 at JKIA with 0.2 kgs pangolin scales. In both cases, a sniffer dog detected the luggage with pangolin scales.

Kenya being one of the major exit points for illegal wildlife trade has been a popular hub for pangolin trafficking. With seizures amounting to almost 1500 kg, in 2016, Kenya has proven to be a suitable hub for trafficking yet again. 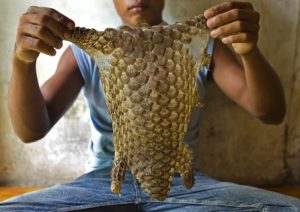 On May 7 this year, another seizure was reported in Malaysia where 10 bags of pangolin scales weighing 304 kg that originated from Kinshasa, Congo transited through JKIA and Dubai and arriving in Malaysia on May 2.

Despite being the most trafficked animal in the world, very few people know or understand the important role of controlling pests that pangolins play in the ecosystem. It is estimated that an adult pangolin can consume more than 70 million insects annually. Their constant burrowing habit also aids in the decomposition cycle and vegetation growth and their burrows are also occupied by many other species. 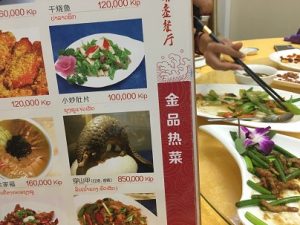 Often known as scaly ant eaters, pangolins are known for their long sticky tongue for trapping and eating ants and termites. There are eight species of pangolins spread around Africa and Asia and they are either endangered or critically endangered. They are particularly vulnerable to overexploitation due to their very low reproductive output, giving birth to one, and rarely two, offspring annually, and have a generation length of between seven and nine years, depending on the species. This, of course, means their ability to recover from such high levels of poaching is almost impossible. Their ability to quickly roll into a tight ball when under threat also makes them more vulnerable to poachers.

Sought after for their scales and meat, pangolins have become the most trafficked animals in the world surpassing the rhino and elephant trade. The scales are considered a cure for a variety of ailments including cancer, skin and liver diseases despite there being no scientific proof of its medicinal value. The meat is also lauded as a delicacy in East Asia with the biggest market in Vietnam and China.

A huge step was made at last year’s Convention on International Trade in Endangered Species (CITES), a proposal to add all the eight (8) pangolin species on Appendix I was adopted. This new law gives pangolins full protection under CITES and aims to eliminate any question about the legality of trade, making it harder for criminals to traffic them. This is important to Kenya and the other 188 countries that are party to CITES.

WildlifeDirect seeks to continue sensitizing people about the plight of pangolins and ensuring that the rule of law is upheld when prosecuting the cases that involve pangolins.

We invite Kenyans from all walks of life to be vigilant and report to authorities on any person who may be actively been involved in the trade.

We are committed to ensuring that this trafficking is brought to an end.