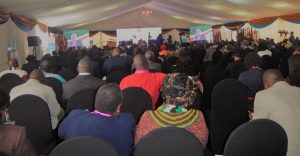 Delegates at the Wildlife Economy Summit in Victoria Falls, Zimbabwe

African governments urged to review current country laws governing the management of wildlife and recognize community rights over the ownership, management and use of resources. In a Declaration signed on 25 June 2019 at Africa’s first Wildlife Economy Summit by 40 community representatives from 12 countries, the communities demanded to be recognized and respected, as shareholders and not mere stakeholders in the new deal for rural communities and wildlife and nature. It was clear that communities across the African continent no longer want to be passive bystanders.

The plastic free three-day conference that was held at Victoria Falls in Zimbabwe, between 23-25 June 2019 brought together over 1300 delegates from Africa and across the globe with a highest number of representation coming from the Southern African countries. The Summit was attended by 4 four heads of States from Botswana, Namibia, Zambia and host country Zimbabwe. Also in attendance were 14 ministers from different African countries, heads of conservation organizations, youth and communities. The delegates deliberated on a new deal for nature and people in Africa that will ensure that citizens benefit from their wildlife.

WildlifeDirect was represented at the Summit by Trish Sewe, Chief Operations Officer and Mary Morrison, Legal Associate. WildlifeDirect has been in the forefront advocating for the uplifting of all elephants to Appendix 1 to ensure that the vulnerable species does not go into extinction. The WildlifeDirect team had the opportunity to interact with several delegates from various countries, representatives of various governments and International Organizations including local, regional and international media. During an interview ITV Media, Trish emphasized the need to place communities at the forefront in decision making on all matters concerning wildlife management. She also stated, “Until African countries with difference of opinion and approaches to wildlife management come to the table dialogue and work together, the continent will not make headway in addressing the challenges facing its people.”

The youth and communities play an integral role in conservation and cannot be overlooked. They must be included at all levels of decision making. African governments were urged to review current country laws governing the management of wildlife and recognize community rights over the ownership, management and use of resources.

WildlifeDirect has already started a movement of Wildlife Warriors aimed at building consciousness about wildlife, so that people will treasure it and act to save it. WildlifeDirect believes that Africans are the new champions and defenders of wildlife and the protected areas and they will be motivated to do this.

Our focus is on protected areas as the legally recognized places that the government is mandated to protect. Behaviour change by governments is essential- they must stop putting projects in parks, get projects out of parks, and defend parks from all threats.
We will create an army of Africans who demand the behaviour change of governments. These people themselves will also change behaviour – from passive non users of parks to avid park users who treasure these places and their experiences in them.

The Wildlife Economy Summit was organized by African Union (AU) and United Nations (UN) in partnership with several development partners including Space for Giants, who presented a report that sets out a pioneering Toolkit with seven simple steps to guide protected area authorities to attract new international investment to fund national parks while conserving environments and providing socio-economic benefits.