The final theme in Season Two of the Wildlife Warriors Nature’s Treasures Photo Competition DRAMATIC WILDLIFE received 154 images from 57 different photographers in Kenya and Uganda. We take this opportunity to say a big thank you to all photographers who shared with us their photos in each category and theme over the past 12 weeks. 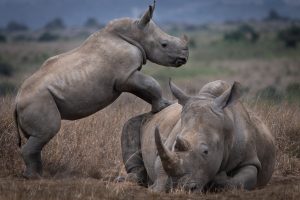 Vishesh Sonigra from Kenya wins the Professional Category on the theme Dramatic Wildlife for an emotional image of a Southern White Rhino and its calf. The image was captioned by the photographer as, ‘A rhino calf playing on the mother’s back while she sleeps’.

The judges were moved by the image which portrayed a heart-warming moment. The photographer was able to capture an unusual interaction of a near threatened species. The image also has a natural feel to it. We spoke to Vishesh about his image.

What do you do for a living?

I am an economist by profession, but I left that life behind and now own a Board Game Cafe in Westlands. This was my first competition to enter.

Which camera did you use?

What is the story behind the image? i.e what were you doing when taking the photo?

I was on my regular weekly game drive in Nairobi National Park and was going towards the Athi Plains based on lion sightings spotted the previous day. I did see a rhino in the distance but couldn’t get to them as there were no roads so I proceeded to the plains as planned. Unfortunately, I didn’t see any lions and after a while turned back to head to the other side of the park. On my way back, I saw the rhino closer than before and realized it had a calf with it. I found an access road to get to them and the mum was sleeping with the calf by her side. After about 30 minutes of resting, the calf grew restless and wanted to play. So he started nudging the mum and running around her and after a few minutes, attempted to climb on top of her. That is when I captured this moment.

What top tips would you offer any upcoming young person interested in nature photography?

Just keep shooting anything and everything to improve your skills, I started with a camera phone and grew into it, then got myself a Nikon Coolpix P900 and finally bought a second hand Nikon D600. I taught myself everything I know just through reading online and continuously practicing to hone my skills (I still learn something every time I go out to shoot). Also, patience is key, every time something good has happened it’s been because of just waiting and watching.

What do you love most about nature photography?

I love the peace and tranquillity of nature. You can easily get lost in the busy city life, but nature offers you a way to escape it and just provides an avenue to relax with all the beautiful sights and sounds. It’s almost like meditation for me. 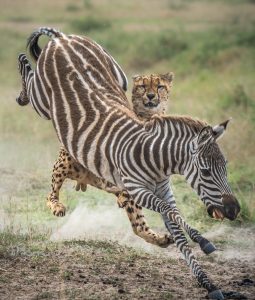 Suhaib Alvi from Kenya is the Runner – Up in the Professional Category on the theme Dramatic Wildlife for an exceptional image of a cheetah attempting to pounce on its prey, a zebra.  The photographer captioned the image as ‘He got Balls!’.

The judges were fascinated by the intense moment that was captured by the photographer. We spoke to Suhaib about his image.

What do you do for a living?

I just graduated from University where I studied Mechanical Engineering.

Which camera did you use?

I was on safari in the Masai Mara. We were following this cheetah, who is part of a coalition of 5 cheetahs, for 8 hours until eventually this moment happened and I was able to capture it. The cheetahs were able to take down the prey.

What top tips would you offer any upcoming young person interested in nature photography?

If you want to witness such moments on safari you have to be patient. I waited for 8 hours to finally see the cheetahs hunt prey. Also, on safari make sure you can get a knowledgeable tour guide who can predict animal movements and behaviour in advance so that you are always in the best position to capture great moments.

What do you love most about nature photography?

I enjoy watching live hunts on safari the most. It’s all about the thrill behind it. Being with nature is so relaxing. 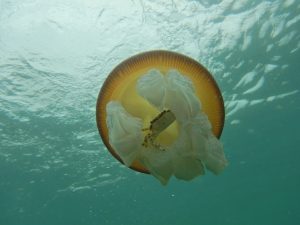 Peter Leposo from Kenya wins the #WildlifeWarriors Nature’s Treasures Photo Competition Amateur Category on the theme Dramatic Wildlife for an intriguing image of a crab under a jellyfish in Kenya’s Wasini Channel. The image was captioned by the photographer as ‘Jelly food or hitchhiker!.’

The judges were fascinated and curious about this particular image which captured a spectacular moment. The judges also spent a lot of time debating which was the predator and which was the prey. Peter’s image stood out of all the images submitted on this theme. We spoke to Peter about his image.

This photo was taken while on a safety stop during a dive. Normally, when the winds change direction, we experience jellyfish blooms in the Wasini Channel. This particular jellyfish (predator) was quite interesting as it captured a crab (prey) underneath its tentacles.  Safety stops can be sometimes quite boring since you have to level off at 5m depth for 3-5 minutes to allow off-gassing the excess nitrogen in the body. This particular jellyfish made the safety stop an interesting one.

Congratulations to Peter who wins Ksh 3500. This is his second win. Follow his work on Instagram @pleposo. 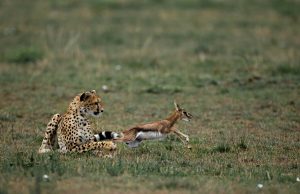 Harshul Thacker from Kenya is the Runner Up in the Amateur Category on the theme Dramatic Wildlife with a photo of a cheetah and a young gazelle captioned by the photographer as ‘Running to a Second Life. ‘

The judges were captivated by the moment captured by the photographer which shows quite a sad scene unfolding. We spoke to Harshul about his image.

The picture was taken in the Maasai Mara where we found the cheetah resting on a termite mound. There were baby gazelles (fawns) in the distance. The cheetah woke up and ended up catching the baby gazelle. After it caught it, the cheetah was panting a lot so it held the gazelle and lay down to catch its breath. The baby gazelle tried to escape but the cheetah ended up grabbing and killing it after.

Congratulations to Harshul who wins Ksh 2000. This is his second win. Follow his work on Instagram @framehalt. 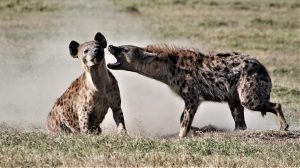 The judges were intrigued by the photo, which showed the unique behaviour of Hyenas. The dust rising in the background indicates there was tension between the two hyenas. We spoke to Veer about his image.

How old are you?

Which camera do you use?

What is the story behind the image:

I was in the Ol Pejeta Conservancy when I saw Hyena pups playing in their den. A male hyena approached the pups and the mother came to protect them. It was during the scuffle that I took the picture.

The thing I like most about wildlife photography is being out in nature with animals capturing their beauty and telling a story to promote conservation. I also love videography and have a YouTube channel to share my wildlife experiences.

What advice would you give an upcoming young wildlife photographer?

Wildlife photography takes a lot of patience, dedication, creativity and a very supportive family, also you should never give up your passion and keep taking photos.

What top tips do you have for young wildlife photographers?

Try to get as low as you can to your subject since it gives the photo more intensity. You should also focus on the subject. The rule of thirds is a good principle to also follow. 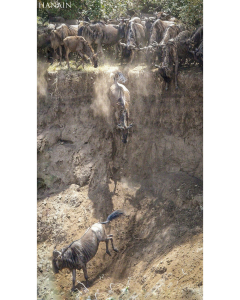 Hanain Ayub (15 years old) from Kenya is the runner – up in the #WildlifeWarriors Nature’s Treasures Photo Competition Junior Category on the theme  Dramatic Wildlife for a remarkable photo of a wildebeest on the move. The image was captioned by the photographer as ‘Leaps of faith’.

The Judges were intrigued by the photo, which captured an amazing moment. We spoke to Hanain about his image.

I was in the Maasai Mara during the wildebeest migration where the wildebeests were headed towards the river running along a path with a steep edge. Since they were many, some got pushed over the steep edge. It was hard to find a position to take a shot of this marvel, but I got a lucky shot and I took it.

We are indebted to the incredible judges; Usha Harish, Callie Broaddus, and Ananth Krishnamurthy who spent hours judging all the photos every two weeks. 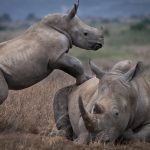 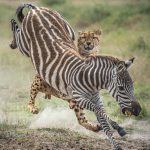 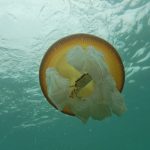 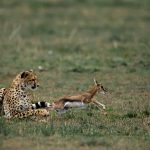 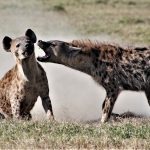 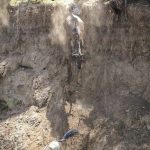