This week, the Wildlife Warriors Nature’s Treasures Photo Competition on the theme Healthy Habitats received 84 entries from 31 different photographers. The judges were impressed by the quality of the photos noticing an improvement in the type of photos being submitted to the photo competition. 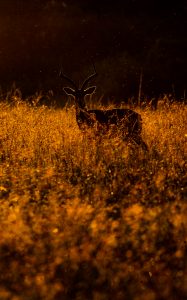 Jonathan Kaelo for a striking photo of an Impala captured at the golden hour in Masai Mara.

The judges were captivated by the ecosystem around the impala with the grasses and the insects. The photo has three main components – the impala, the grass, and the insects – and is thus not distracting to the eye. The impala seems to be looking straight at the camera or photographer. The judges were also fascinated that the photographer responsible for this photo is a tour guide. We spoke to Jonathan about his image.

What is the story behind your photo? I took this picture in January this year just next to the Mara Bush Camp after the rain late in the evening. I had just dropped guests at the camp and on my way to my room, the last rays of the sun were striking through on opening through the thick clouds. As a photographer, I knew I could make a good backlight image, and checked around for a subject and found this male impala and my camera settings did the rest.

What camera do you use? I used a Canon EOS-1DX camera and 500mm lens.

What do you do for a living? I am a tour guide and currently work with Sunworld Safaris

What top tips would you offer any upcoming young person interested in nature photography? My tip to young upcoming photographers is to have passion. Make an image you want in your mind even before you pick your camera. Know your camera well. 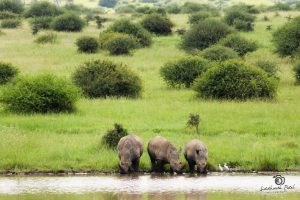 Siddharth Patel for a beautifully composed image of Southern white rhinos at a water pool with a green background perfectly capturing a healthy habitat which was this week’s theme.

The judges were captivated by the background which reflects on the theme healthy habitats. One can really see the full habitat with the white rhino and the little egrets on the right of the rhinos. The photographer also captured the rhinos as they looked at the camera. We spoke to Siddharth about his photo.

What is the story behind this photo? I took this photo in 2018 in Nairobi National Park at the Athi Basin. We were having breakfast at midday and saw three rhinos stop by the pool to drink water and we were perfectly positioned to take this shot. The Athi Basin is quite green and wildlife come in and out from the migration corridor grazing around this basin.

What do you do for a living? I’m an aeronautical engineer and photography is a hobby.

Any advice for any young photographers? The best way to learn photography is to experiment in different settings. Don’t stick to a setting because you might be surprised at what you get. Different conditions require different lighting and sometimes you never know. 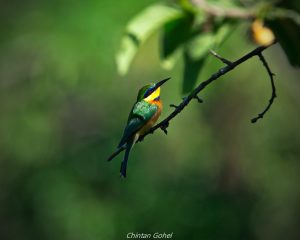 Chintan Gohel for a very sharp image of a Little Bee-eater.

The judges were captivated by the sharpness of the image and the incredible catch light on the eye. The image was well taken in focus, in beautiful color, and was not over-edited. You can also see the green of the surrounding habitat. We spoke to Chinton about his image.

When did you take the photo and where were you? I took the photo in Nairobi National Park in January 2019.

What were you doing there? I had gone with my parents to Nairobi National Park. We were taking photos all around the park and whenever I saw a bird I didn’t know I would take a photo.

What do you do for a living? I’m an engineer by profession and in my free time, I enjoy traveling and taking photos.

What made you take the photo? Taking photos is about preserving memory and sometimes it’s capturing a species that may not be there in some years to come. You can also showcase the images to your family, friends, and followers.

What top tips would you offer any upcoming young person interested in nature photography? Keep learning and keep sharing what you do. There are people who can review your photos and in the end, help you grow. Persevere at all times because it takes time to learn about photography which is always a continuous process. 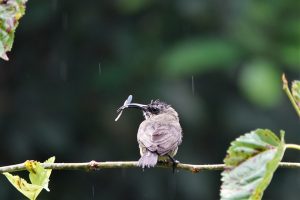 June Mwangi for a beautifully composed image of female Bronze Sunbird perched on a mulberry tree branch hunting flying termites. Most sunbirds feed on nectar but will sometimes eat insects to supplement their diet or feed their young.

June followed the sunbird for half of the day and saw it feeding it’s young in the tree but there were many leaves and branches so she waited for it to come out. That’s when it started raining, but she continued watching it as it caught flying termites and she took several photos of this female as she held the termite in her bill.

The judges were impressed by the composition and sharpness of the image. We spoke to June about her image.

Where and when did you take the photo? I took the photo in our compound at home on Saturday.

What inspired you to take this photo? It was beautiful.

What camera or phone did you use? I used my Aunt’s Sony DSC RX10 camera.

Do you have any tips for young photographers? When you go outside take as many photos as you can. Among them, you will find the best and you can win.

The judges commend the youngest photographer, Vihaan Shah who is 5 years old, for a well-composed image with Sacred Ibis, Egyptian geese, egrets, and a crocodile on the shores of a water basin taken at Nairobi National Park. This image is well captured and is in line with the theme Healthy Habitats. 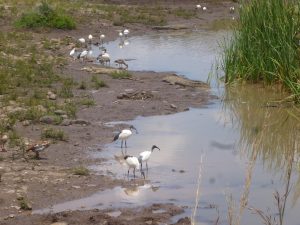