This week, the #WILDLIFEWARRIORS PHOTO COMPETITION on the theme HUMANS HELPING NATURE received 70 photos from 27 different photographers. The judges were moved by the stories behind each image. This week’s winners captured three different themes of how humans are making the planet a better place by planting trees, rescuing wildlife, and cleaning up our rivers. 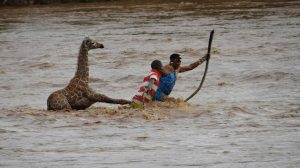 Jelly Lolojo for a beautiful image of a giraffe rescue operation.

The image was taken by tour guide Jelly Lolojo on his friend Mike Lesiil’s camera. We spoke to both of them on the story behind this image.

What do you do for a living? I am a ranger and currently work in Maralal in a Sanctuary where I’m educating people on the importance of wildlife.

Jelly Lolojo:  Mike and I had clients that we were taking for a game drive when we saw the baby giraffe stuck in the middle of the river. When mike went to rescue it, I picked up his camera and took the picture because I was so impressed with his courage. He is a very brave warrior and is passionate about wildlife. I was very worried about him while he was rescuing the baby giraffe because the river has crocodiles.

What do you do for a living? I’m a professional safari guide in Samburu. 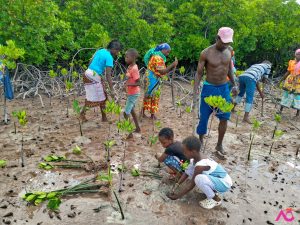 Ashikoye Okoko for a beautiful scene of mangrove tree planting by the community in Mida Creek.

We spoke to Ashikoye about his image:

What is the story behind this photo? This is a mangrove rehabilitation project where the communities around Mida Creek have seedbeds that they sell to generate some income and also plant in areas where there is the degradation of the mangrove forest. The community plant mangroves which are as breeding sites for fish and crabs and also a source of timber.

Check out Ashikoye’s Instagram page @oashikoye. This is his 4th win. Congratulations. He walks away with Ksh 500. 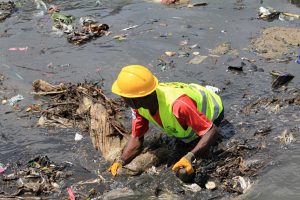 John Nigen for a captivating image of a river clean-up activity in Nairobi. We spoke to John about his image.

What is the story behind this photo? I took this photo during a clean-up activity along Nairobi River in Baba Ndogo around Lakisama Area. I was moved by the sight of a volunteer struggling to remove plastic waste from the river.

What do you do for a living? I’m a footballer and I also take photographs as a passion and an interest. 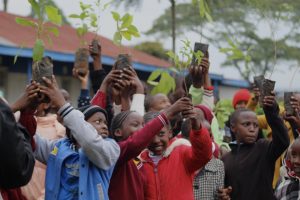 Shiru Ndegwa for a beautiful image of children preparing for a tree planting activity.

We spoke to Shiru about her image.

What is the Story behind this image? The photo was taken during a tree planting activity with Kijani Gang in a school in Kiserian. We were teaching the children how to plant the trees.

Congratulations Shiru. This is her 4th win. She walks away with Ksh 400. 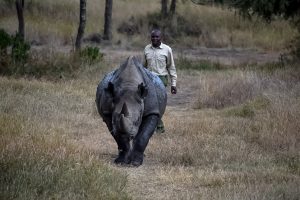 Marto Wanjohi took this image because he was fascinated by the ranger escorting the rhino. The rhino is Baraka, a blind Rhino from the Ol Pejeta Conservancy. He was being escorted to a platform where tourists can have a close encounter with him.

This week’s theme is NON – MAMMAL PORTRAITS. Send your submissions (phone and camera photos) to bit.ly/WildlifeWarriorsKE (3 images per person only). Junior category is age 15 and below. Entries close on Sunday, May 24th, 2020 at midnight.