This week the Wildlife Warriors Nature’s Treasures Photo Competition received 39 entries from 17 different photographers on the theme “Under the Surface”.

OVERALL WINNER AND RUNNER UP #1 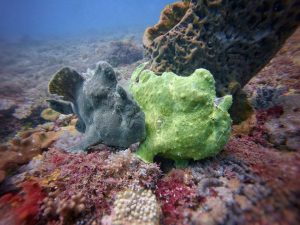 Azym Asger for a striking photograph of two frogfish. Frogfish are among the strangest creatures underwater. They change color as they age and are so well camouflaged and adapted to their immediate surroundings, that they are difficult to detect. Frogfish, are lie-in-wait predators. They are equipped with a specialized lure that they dangle in front of the head. A passing fish is attracted to the lure thinking it is an easy meal only to become lunch himself! Though Frogfish are slow movers, they have the fastest strike speed of any animal on earth. Not surprisingly, frogfish is one of the most popular subjects for underwater photographers.

The photo won in the theme Under the Surface because of the incredible composition of not one but two different colored frogfish that almost look like they are mirroring each other. Taken with a Go Pro, Azym achieved surprising sharpness that is visible to the eyes. We spoke to Azym about his picture

What do you do? I’m a scuba instructor
Where did you take this amazing photo? In Diani Beach
Where did you learn photography? I’m self-taught and I teach underwater photography.
How did you find the Frogfish? These fish are hard to find because they are so well camouflaged. You have to swim slowly and really search. With experience, it becomes easier.
Do you have some top tips for newbie photographers? It takes time to develop your eye. Practice and learn from your mistakes. Be aware of the animal’s movement, your angle from sunlight, and water clarity. Know your camera well, if you get too close with a Go Pro, the picture will be blurry. 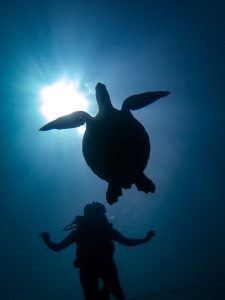 Our judges evaluate all photos blindly – imagine our surprise when they chose the photo of a turtle and a diver which is another of Azym’s photos in the runner up category. The judges were really impressed by the composition of the photo and his use of light. 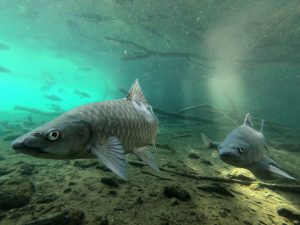 The judges were impressed by the wide-angle on the first fish and the sunbeam which spotlights the second fish. The first fish has a great personality shown through the photo and you can also see other fish in the water next to the first fish. We had a conversation with Teddy.

What do you do? We have a small business called Cooks Well Jikos where we make energy-saving jikos that use charcoal and firewood and because of that, we got into doing tree planting as well. We came up with a small project called Seedballs Kenya. For fun, I try to travel around Kenya as much as possible.

Where did you take this photo? I took this photo in Mzima Springs in Tsavo. I have been to Tsavo since I was a small boy but recently I noticed that at the underwater viewing aquarium you can’t see through the glass nicely anymore. But it made me think. I had my GoPro and a small walking stick. So I tied the GoPro with some string to the stick then I put it in the water to see what it looks like on high definition underwater. I have been trying to do more as I travel around Kenya, because I like photography, to take pictures underwater in different places. I’m inspired by Jahawi Bertolli. He made me think there is a whole world in Kenya that’s not just the big five.

What is your advice to aspiring photographers? When one looks at ecosystems, one has to think of not only the elephant but think all the way down to maybe the flea that lives on the elephant and realize that there is beauty and interest in both. The longer I live here and the more I travel I realize we don’t really understand how amazing all of our wildlife is. Most people think that wildlife is leopards and lions but I think there is so much more. The more you can learn about it and see it and document it, the more it can even help someone in the future if they can use the photo of this fish to say they have become bigger or smaller.

JUNIOR CATEGORY WINNER (age 15 and below) 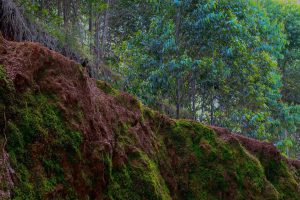 Shiru Ndegwa (14) whose photo on life in the soil, where you can almost see the roots of plants shows an angle of what people would not normally look at or see.

Where did you take this photo? In Muranga
What kind of camera do you have? Canon EOS 4000
What inspires you? My dad inspires me to take photos and guides me through it. I also love taking photos.
What advice would you give other young photographers? To have fun.

This week’s theme is In The Sky. Send your submissions (phone and camera photos) to bit.ly/WildlifeWarriorsKE (3 images per person only). Junior category is age 15 and below.