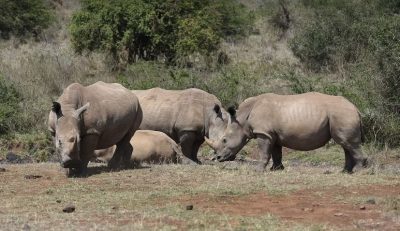 White rhinos grazing at Nairobi National Park in a past photo

It is with deep shock that WildlifeDirect learnt about the tragic loss of eight rare black rhinos during the translocation exercise that was carried out more than a week ago by Kenya Wildlife Service with support from WWF-Kenya. The rhinos were being translocated from Nairobi National Park and Nakuru National Park to the newly-created sanctuary in Tsavo East National Park.

This is shocking and disheartening. The translocation exercise was meant to support the successful breeding program of this critically endangered species of black rhino for which Kenya holds 80% of the sub-species.

In a statement released by the Ministry of Tourism and Wildlife, Rhino translocation and immobilization for various management purposes in Kenya has been a success story with very low mortality rates over the years. Between 2005 and 2017, one hundred and forty-nine (149) rhinos have been translocated with eight (8) mortalities, excluding the current deaths in Tsavo East N. Park – 11 translocated with eight fatalities.  It’s surprising because KWS has conducted many successful large scale translocations of rhinos before.

This is a major conservation tragedy, not just for Kenya but for all rhinos. We are happy that the government has released a statement confirming  the eight deaths and we look forward to the outcome of the investigation as well as reassurances that we will adopt the best practices in wildlife translocations to learn from this disaster and prevent it from ever happening again.

Download press release from Ministry of Tourism and Wildlife here.