Thousands march for wildlife in Nairobi 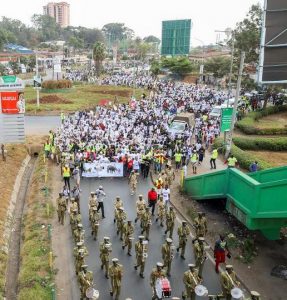 Thousands of people marching for wildlife along the streets of Nairobi. Photo by Peter Chira/AWF

On a chilly Saturday morning in April, thousands of people from all walks of life turned up for the biggest march for wildlife. The Nairobi Edition of Global March for Elephants, Rhinos, Lions and other endangered species attracted more than 3500 marchers who marched for about 15km from the National Museums of Kenya to Kenya Wildlife Service Headquarters.

The march was officially flagged off by the chief guest was Hon. Najib Balala, Cabinet Secretary for Tourism and Wildlife who walked the whole way together with marchers drawn from the business sector, universities, colleges, schools, conservation sector and tourism sector.

Participating organizations and individuals were draped in black and white t-shirts, carrying procession banners, flags, placards while raising their voices against extinction and calling for the closure of domestic markets as well as lobbying governments in a worldwide call to action to protect endangered wildlife.

In his speech during the march, the chief guest, Hon. Najib Balala acknowledged the importance of engaging young people in conservation. He stated, “Young people are the future defenders of wildlife and we must do everything to save wildlife and say no to both legal and illegal trade on wildlife”. During the march he also gave a directive of free entry to the Nairobi National Park which saw Kenya Wildlife Service host over 15,000 people at the Nairobi National Park the following day, a testament to Kenyans’ love for wildlife.

For this and other stories read our latest newsletter here