Mayes raises ksh120 000 for elephants ahead of Safari Rally 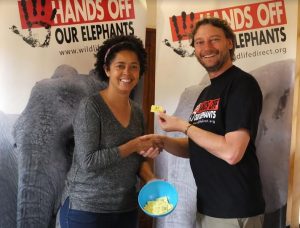 Dr. Paula Kahumbu and Geoff Mayes at WildlifeDirect offices during the selection of winners of the charity raffle for Hands Off Our Elephants Campaign

Chui Safari Lodge manager Geoff Mayes, who will race the Maxxis Tyres and Silverspread Kenya V8 Tomcat in this weekends KCB Safari Rally, has raised over ksh120 000 in a charity raffle for Hands Off Our Elephants. The grand prize of a trip for two to the Sarova Spirit of the Maasai Mara was won by Annalyn Hern from Green Park in Naivasha.

The charity raffle included prizes such as a night for two at the 5 star Chui Lodge in Naivasha, dinner for two at the Harvester Restaurant in Village Market, a wine hamper from Jos Hansen and prizes from RSI Investments, Shabby Shack and Jos Hansen wines. 60 raffle tickets were sold and a total of eight prizes awarded to the winners. Each winner will also get a gift hamper from WildlifeDirect which will include the Hands Off Our Elephants t-shirts, water bottles, stickers and mugs.

Mayes, who is a motorsport ambassador for Hands Off Our Elephants, has two class podiums on the Safari Rally in the past but his co-driver, Suzanne Zwager, who is one of only four girls starting the event, will be making her Safari Rally debut. The pair, who are supported by Maxxis Kenya, Silverspread Meru and H2 ProHydrate, are one of over 50 entries who will tackle the 800 km long WRC Candidate event this weekend.

We thank Geoff who has supported WildlifeDirect for many years and wish him good luck. The Safari Rally will be flagged off at Kasarani stadium on Friday, July 5 2019 and we urge Kenyans to come out in large numbers to support our Kenyan drivers as the 2019 Safari Rally that will grant Kenya the opportunity to return to the World Championships Rally 2020. 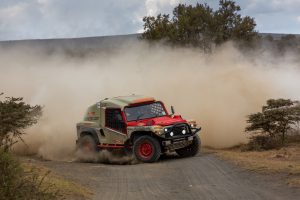