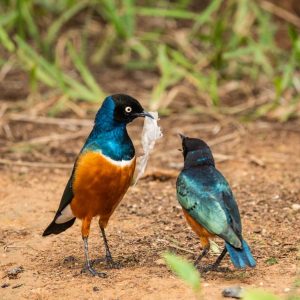 Winner of the Wildlife Warriors Nature’s Treasures Photo Competition on the theme ‘Nature in Distress’ is awarded to Eric Kaisha whose image of a Superb Starling feeding it’s young with plastic waste in Tsavo East National Park at a game lodge.

Our judges unanimously chose this image because the photographer did an excellent job capturing this powerful moment, which so well addressed the theme “Nature in Distress.” Plastic is a ubiquitous problem globally and in Kenya, and images like this one help viewers learn to care about reducing their plastic consumption and properly disposing of plastic when it cannot be reused.

Aside from its conservation impact, this image is a testament to the photographer’s patience. The photographer captured an important behavior, in good light and in focus, and the low vantage point shows that our winning photographer must have spent considerable time waiting on the ground for this moment to occur.

Eric is a banker by profession which is very time consuming, but he is very passionate and inspired by nature that he goes out to the wild whenever he can to take photos. His specialty is birds and he believes that art speaks where words are unable to explain.

Eric is thrilled at winning this competition and wants to enter even more photography competitions. Check out Eric’s amazing wildlife photos on Facebook and Instagram @ekaisha. 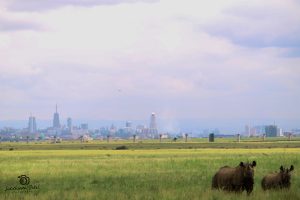 The First runner – up is Siddharth Patel for a photo of a black rhino mother and calf with the backdrop of the Standard Gauge Railway in Nairobi National Park.

This image is surprisingly out of balance, with rhinos on the extreme right of the frame. The judges were drawn to this intentional imbalance which Siddharth explained “I fought to stop the railway from going through Nairobi Park. Now it is here. I wanted to show how we are pushing rhinos out of our world”.

The image demonstrates the vulnerability of our endangered rhinos as they struggle to breed despite development in Kenya.

You can see more of his wonderful photos on Instagram @siddharthpatel01. Siddharth wins Ksh 500. 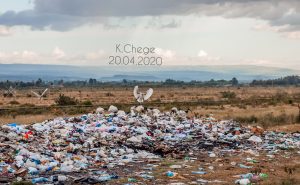 The Second runner – up is Kevin Chege, whose image shows a flock of Sacred Ibis feeding on a dumpsite in Gilgil. Our judges felt that this thought-provoking image illustrates how filth is encroaching the land. The photographer has captured it well to describe the theme “Nature in distress”.

Kevin’s image is very interactive and tells a story. Sacred ibis in flight being the central focus while the others are busy scavenging. The railway and the beautiful mountains in the background showing today’s reality which at one point of time was only nature.

We spoke to Kevin who told us that he photographed the image to illustrate the pollution in the area “I live near this dump and I see this scene of birds feeding on the trash every day. It touched my heart so much, it’s so disturbing. The waste is spreading to other places. Something has to be done about it”

Kevin is a full-time photographer since 2016 when his brother came home with a camera. He is self-taught and loves conceptual photography. Check out his incredible mind-bending images on Facebook at Kay_Photography and on Instagram @therealkayphotography. He loves nature and would love to be able to sell his nature photographs. Kevin wins Ksh 500. 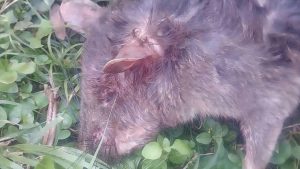 The Junior Category winner (aged 15 & below) is Tyler Belcher who is 11. His photo of a Giant Gambian Pouched Rat killed on the road illustrates that transport infrastructure is a great danger to wildlife in the city.

Tyler cares about wildlife and says he felt sad when he found the dead rat. Tyler wins Ksh 400, we sent the money to his mom.

The Wildlife Warriors Nature’s Treasures Photo Competition is running for twelve (12) weeks from 17th March 2020 as an incentive for Kenyans to go outdoors, observe, document and share your love for nature. Each week will have a different theme.

This week’s theme is Beauty of Biodiversity. Send your submissions (phone and camera photos) to info@wildlifedirect.org (3 images per person only). Junior category is age 15 and below.