This week, the #WILDLIFEWARRIORS NATURE’S TREASURES PHOTO COMPETITION on the theme NON – MAMMAL PORTRAITS received 93 photos from 29 different photographers. The judges were impressed by the quality of the images submitted. 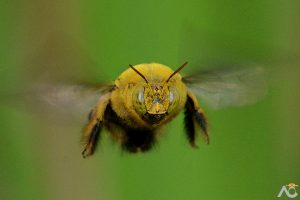 Ashikoye Okoko for a spectacular image of a flying Carpenter Bee.

The Giant carpenter bee (Xylocopa nigrita) is the largest Bee found in East Africa. The females are seen most often and have distinctive black and white markings. The males are covered in bright golden hairs that glow in the sunlight. Carpenter bees are important pollinators in gardens and some food crops. We spoke to Ashikoye about his image.

What is the story behind this photo? I noticed this carpenter bee was going around in circles from one point to another and I decided to experiment taking a photo of it.

For Ashikoye, the 5th time is a charm. He has won four times but as a runner’s up. Congratulations. He wins Ksh 1000. Have a look at more of Ashikoye’s work on Instagram @oashikoye. 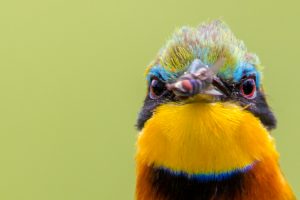 Anthony Ochieng’ for a beautifully composed image of a little bee-eater catching a fly.

The judges commended the photography for capturing the little bee-eater in its natural element and noted the challenges of capturing a bee-eater with a front angle like this. The judges were impressed by the photographer’s ability to capture the bird’s personality. We spoke to Anthony about his image.

Where did you take the photo? I took the photo at Rusinga Island

Which camera do you use? I used a Canon EOS 70D

What is the story behind the photo? I had gone birding and had a pair of binoculars but no camera. I found a pawpaw plantation and little bee-eaters playing around. When I saw the composition and the possibility of a picture, I ran back home, which is 3 km away to pick my camera. I picked a bike and went back. I knew the little bee-eaters would stay longer since ripe fruit plantations attract insects which attracts birds such as bee-eaters. When I saw this little bee-eater looking at the camera I took the shot. This is one of my favorite images which has inspired me to take more bird photos.

What do you do for a living? I’m a Wildlife Ecologist and Conservation Photographer

What do you like about nature photography? It’s a chance to showcase our biodiversity.

What advice do you have for upcoming photographers? Take as many photos as you can.

Have a look at more of Anthony’s work on Instagram @TonyWildKe. Congratulations Anthony. Who walks away with Ksh 500. 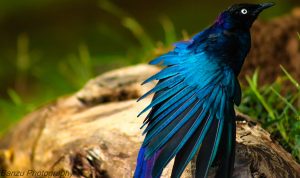 Jackline Nzuva for an uncommon portrait of a common bird, the Greater Blue – Eared Starling.

The judges choose this image because of the sharpness and the angle of the light on the starling which also showcases the contrasting colours of the bird. The photographer also captured the unusual display of the feathers and is a lovely portrait of a bird in motion. The photo also causes you to look at it for a second time. We spoke to Jackline about her image.

Where did you take the photo? I took the photo at Lake Bogoria in January during a camping adventure.

Which camera did you use? I used a Canon EOS Rebel T7i

What is the story behind the photo? I like adventure and taking photos so when we were camping at Lake Bogoria, I took the opportunity to take photos and the starling was one of my subjects at the camping grounds.

What do you do for a living? I work in Admin and Finance

What do you like about nature photography? Growing up, I admired photos from great photographers and I was curious about how they took them. I later developed an interest in photography and started reading about cameras and taking photos. I’m currently uncovering the mystery of photography which I had when I was young

What advice do you have for upcoming photographers? When you are doing photography do something for your passion.

Have a look at more of Jackline’s work on Instagram @nzuvaj. Congratulations Jackline who walks away with Ksh 500. 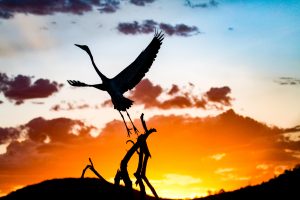 Hanain Ayub for a beautiful silhouette image of a heron.

The judges commended the photographer for a well-composed image especially the bird’s flight going towards the left and the sun to the right. We spoke to Hanain about his image.

Which camera did you use? Canon EOS 70D

Where did you take the photo? I took the photo in Samburu.

What is the story behind this photo? I was watching the sunset, saw the birds and it was good timing when they took off.

What do you like most about nature photography? The patience and how long it takes you to get a good photo.

What advice do you have for young photographers? Continue going out to take photos and do your best as much as you can.

Have a look at more of Hanain’s work on Instagram @hanain1_. Congratulations Hanain. Who walks away with Ksh 400.