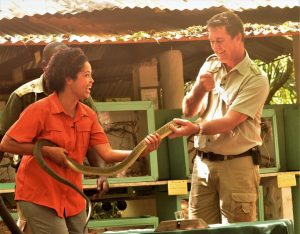 Dr. Paula Kahumbu with Royjan Taylor at Bio Ken Snake Farm during the shooting of the NTV Wild Talk episode on snakes.

It is with a very heavy heart that I share a great loss to Kenya, the conservation community, herpetology world and the close knit Watamu residents, the communities he served and all the staff and friends of Bio-Ken

I have known Royjan Taylor since he was in high school. One of his best friends was my field assistant when I was doing my PhD research in Shimba Hills. I saw these young men live as if every day was another adventure. They were catching snakes in hedges around Diani.

Later when he moved to Watamu to help James Ashe I saw a different side of him, compassionate and loving towards James and Sanda, super supportive and accepting of their ways – yet gently nudging them and helping then to realize a dream of creating a globally relevant reptile center that did research and education, while also milking venomous snakes.

He was amazing with local communities. He developed a powerful system of educating them about snakes, and responding to snake bites. He even hired victims of snake bites to work at Bio-ken and stayed in touch with so many people whose personal stories are powerful testament to his role in saving so many lives.

Royjan Taylor was available to everyone – it was a blessing and I bet he felt it was a curse at times. He put his personal phone number on a poster so that if anyone ever got bitten by a snake, he could be reached immediately – he knew that it was a matter of minutes that could be the difference between life and death. That meant he was always busy, always getting those calls and coordinating responses.

I was once in Amboseli when a colleague was bitten by something in the dark. By the time I got to her, her foot was swelling and throbbing painfully. It was 11 am; I sent a photo of the foot and a snake that had been battered to death. He immediately called me and asked where I was. There was an urgency in his voice I feared the worst until he told me that he had received the same two images 38 times in the previous hour. He asked me to step away from her, I gulped. “The good news is that this is not a snake bite. The bad news is that it’s a scorpion sting and there are two types of scorpions there. One type is not a problem, the other could be deadly. There’s no antivenom for it”. My instructions were to sit with her for 4 hours and report back every hour on her condition. The swelling and pain remained constant and he assured me that the scorpion was not the nasty one. In the morning her foot was fine. Having Royjan accessible like that was incredibly reassuring.

Snakes are detested across Kenya and most people’s first reaction is to kill any snake that they see – then photograph the remains and try to get them identified in a morbid obsession with knowing more about them. Ignorance is so dangerous. When we planned to make an episode of NTV Wild Talk with Smriti Vidyarthi at Bio-ken, many people said don’t do snakes. You will lose your audiences. Smriti Vidyarthi had already told me that she had a serious phobia of snakes – it was going to be a very tough shoot. But Royjan and his team gently broke that phobia for enough time to film the episode. It was one of the most memorable episodes that we did.

We returned again last year to film an episode of Wildlife Warriors about Royjan’s protégé and right hand man, Boniface Momanyi – Royjan’s support for that episode was amazing. We screened it to great appeal in Kenya and we showed it in classrooms. Our friends Noel Kok and Pragna Parsotam-Kok screened it in a township in Durban. They loved it and we realized that Royjan’s passion for snakes was contagious.

His obsession with addressing venomous snake bites was the motivation for us to hold a 10 day course on the issue in Watamu earlier this year. Royjan was incredible, busy but yet managed to pull everything together.

Like many close to him, I did not know that Royjan was unwell. His energy, laughter, constant calls and text messages had an urgency that was hard to ignore.

He was an adoring husband and father – that was plain and obvious. He was always bragging about them and it was clear that Royjan’s entire life was complete, he had his passion connected to his work, and his family and friends were connected intimately to his passion.

Royjan lived an incredible full life and has left us far too early. I am struggling to process this sad news.

RIP Royjan Taylor. I don’t care what others say, I hope there are lots of snakes in heaven.