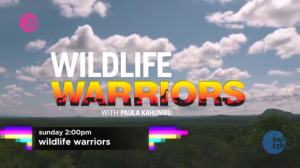 We are thrilled to announce a new partnership with Switch TV to screen the Wildlife Warriors: Season 1 every Sunday at 2:00 PM (EAT). Wildlife Warriors shines a light on local conservation heroes who are breaking new ground and risking their lives to conserve that which they hold most dear, the land of their ancestors and the animals they have lived closely with for generations. Switch TV is a new channel that targets youth audiences especially university students. We aired the first episode on Sunday, April 26th.

The series is produced by Dr. Paula Kahumbu and filmed by Vivid Features. It was funded by the U.S. State Department of the Interior through USAID, Wild Lives Foundation, and National Geographic.