Skip to content
Previous Next
Showdown looming at CITES 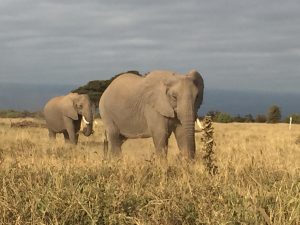 Elephants at the Amboseli National Park

Eastern and Southern Africa will take the next Convention on International Trade in Endangered Species of Wild Fauna and Flora (CITES) to another ugly argument about ivory trade. They are pitching for a big fight. Kenya and her ‘friends’ want to transfer all elephants to be on Appendix I, which will send a clear message – NO IVORY TRADE for anyone.

A southern African leader recently referred to Kenya as “the enemy”.

How amazing that disagreement over views regarding the sale of the teeth of one species could cause such animosity between two great nations.

The point of departure is trade in ivory. Kenya does not agree that ivory trade is a solution for these problems.

Southern African countries are trying to forge a joint management approach for elephants. They want money from the sale of ivory to pay for the management of their elephants. They do not want to be dependent on donor funds. Nor do they want donors to have a say in their management decisions.

In Kenya we don’t really want to be donor dependent either. We want our government to make wildlife conservation as important as health, education and other heritage preservation priorities. We want the government to take a meaningful part of the 2 billion dollars generated from wildlife each year, and put it back into conservation.

The challenges that we face with managing elephants is related to limited resources. They are expensive to manage, they are after all, the world’s largest living land mammals. They need lots of space, diverse habitats, and lots of water.

As Africa bickers and fights over the ivory trade, we have lost sight of what really matters and what is really at risk. Yes, we could breed elephants in cages like they do lions in South Africa. Yes we could hunt and cull these majestic animals and manage their numbers as we manage fish in fish farms. But then, they would not really be elephants. You only have to compare the expression and behaviors of a zoo elephant to a wild elephant in Amboseli to know what I mean.

Losing wild elephants means losing more than we could imagine. We could calculate the loss of ecological services that they provide and argue that. We are undermining the earths interconnected web. Losing just one keystone species is like cutting the major struts (not just links) in a giant spider’s web. We are seeing ecosystems collapse as tipping points are reached. Some of them are obvious. You cut down a certain number of large trees in a forest and it will not return to its former forest status as invasive fast growing weeds and climbers will take over and snuff out the sun preventing the primary forest trees from re-establishing. With them, the birds, insects and mammals that depend on will go.

We have seen ecosystems change and settle at different energy levels as the loss of one organism becomes an opportunity for different organisms to dominate. It’s complex not just in terms of species, but also in terms of scale, physical and temporal. Elephants and trees are such long lived species, that the decisions for opening up the ivory trade are happening within the life times of an individual elephant making it impossible to give the species a chance to reach new equilibrium.

But there are things about elephants that we just can’t measure. The value of elephant societies, social structures, relationships, with each other, other species, and us. Just because we cannot place a dollar value on this does not mean it does not matter.

And timing is also relevant. What is value when it changes with generations, with human behavior, with fashions and evolving morals? And values are different in different places. We are witnessing an uprising of global compassion for fellow beings in some places, and the opposite in other places. Where we seem to be immune to the suffering of fellow beings indeed some people seem to experience a dysfunctional delight in causing pain and suffering to other beings.

The situation is complex, difficult to digest and comprehend. Who are we anyway to decide on the fate of other species? Many people are feeling despondent. Powerless. And, things will only get worse when we give up.

I won’t deny that I am terrified with where things are going and what lies ahead for the future of Africa. I don’t know what we can do, but I feel that we must do something. Everything we do matters. There was a time, years ago when I stood as head of the Kenya delegation to CITES and spoke about elephants. Someone from Southern Africa tried to shout me down by accusing me of being emotional. I wondered what kind of life a person must be living if they have no emotions. To him, elephants were just meat, tusks, hair, hides, and dollars. How tragic that some people have never really interacted with and had their lives changed by meeting these truly majestic animals. How do you appeal to someone who simply will not look, hear or feel?

Africa is at a cross roads. What we do in the next ten years may prove critical for the future of the planet. We must unite around agreements on saving our wilderness, habitats, species and ecosystems. Maybe a shared concern for the future of elephants could help unify us.