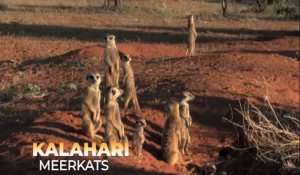 My Wild Africa is keeping Kenyans glued to the TV screens every Sunday afternoon and taking off their minds from the bad news about the Coronavirus pandemic. The films that are of high quality and sourced from Off the Fence, a production company that produces factual television and feature-length theatrical documentaries. Some of the selected films air for the first time on Citizen TV in Kenya on Sunday at 5:30 pm EAT.

In June, we screened the Kalahari Meerkats, an extraordinary series that follows the real-life story of a family of Meerkats known as the Gosa Gang, their passions, their loves and losses, and the secret to their survival in the harsh Kalahari Desert. Meerkats are small mammals in the mongoose family known for their upright posture. They are mostly found in the desert areas of Southern Africa. They are very social animals and live in colonies of 20 to 20 members. Most of the animals live peacefully with the meerkats but snakes and birds of prey are a nightmare. The Gosa Gang fiercely defend their home from these predators. For most Kenyans, this was the first time to see meerkats on their screens.

Meerkats in the Kalahari Desert are constantly under threat from predators at the top of the food chain. It’s not as easy to survive in the hostile Kalahari Desert especially when you are 25 to 35 cm tall. Snakes and eagles are normally the biggest threats for the meerkats.  To survive, meerkats need to work together and stay vigilant living in underground burrows systems to keep them safe from harm’s way and the African heat.

To defend themselves from, meerkats use a broad variety of calls to communicate among one another for different purposes such as to raise alarm on sighting a predator. Standing on the back legs is very important for the meerkats to watch over any impending danger. When a group of meerkats is caught in the open by a predator they will stand together to make themselves look larger and mock the intruder.

The transitioning weather changes in the Kalahari Desert brings with it a new set of challenges. During the dry period, insects dig themselves deeper into the ground as there is no water on the surface. This means that a meerkat will spend more energy to find them making themselves an easy target for predators. A meerkat’s front paws are curved and act as shovels so that they can dig their body weight in dirt fast to avoid being caught. Fortunately, meerkats get enough water from their food to survive and hence do not need to travel long distances in search of water.

The rains which mark the end of the dry season in the Kalahari Desert, comes with a new set of predators which can unsettle a family of meerkats. The new rains will give new life to the land and all its residents. Giraffes, for example, don’t pose a real threat to meerkats, but when you are at most 35 cm tall and your burrow is surrounded by gentle giants, panic will set in. A meerkat puppy may be trampled by a giraffe or they could collapse their burrow. Another threat to the meerkats during this period are leopards which prey on these small mammals.

A meerkats gestation period is 60 to 70 days where three to seven pups are born in the litter. One in three meerkats dies in the first six months in the Kalahari Desert. Meerkat pups are kept securely in a den, from where they emerge after three weeks.  Finding a babysitter is not a problem when you are a meerkat. Both males and females take their turn. This increases the survival rate of the species.

Meerkats are known to share their burrows with squirrels and other mongooses, living in harmony as they do not fight for space or food. Squirrels also pose no threats and help to keep the burrow clean.

For more captivating wildlife documentaries, tune in to Citizen TV every Sunday at 5:30 pm EAT.